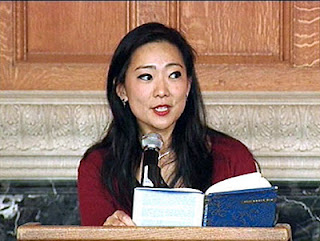 
There were over 1700 poems entered this year and judging the competition was a very educational experience. One thing which quickly occurred to me is that not every good poem is a good “competition poem”. I thought of many books of poems I enjoy – collections by Charles Simic, Billy Collins, Sharon Olds etc. where the fineness of many individual poems is brought out by the close proximity of its siblings; by the way it fits with a poet’s overall oeuvre and is consistent with the poet’s voice. But such fine poems often are not outstanding, they are not the type of poem which qualifies for anthology selection or will impress the casual or non-reader of poetry on the page of a general newspaper. No, the winning “competition poem” is altogether a different beast, a stand-alone achievement which punches above its weight, a corvette which bristles with the armament of a battleship.

Reading poem after poem in a batch of 1700, many otherwise worthy poems failed to impress. A certain de rigueur musical rhythm was monotonous in poem after poem. Many restrained treatments on well-worn themes (Irish landscape being one which springs to mind) failed to distinguish themselves in a field which included so many such treatments.


Many other poems fumbled the ball close to the goal, starting well and progressing well until reaching an unintentional bathetic declaration or sounding a discordant musical note.


In the end, the top thirteen poems distinguished themselves in different ways. Of the 1700 poems the winning poem really stood out for me, while there was some difficulty in deciding which poems to include in the “highly commended” list and which bubbled just below the surface. I decided to publish a list of 70 commended poems, wishing to reassure many entrants of their achievement while risking angering many others who did not make it through to the top 80. To those people all I can say is that the poems were judged anonymously, read by me with no author’s name attached and no personal slight was intended.


The winning poem, Suji Kwock Kim’s (USA) ‘Sonogram Song’, won me over by being highly imagistic and argumentative at the same time. There are very few poems which can sustain philosophical speculation amid such effective evocation of sensory perception without going awry. Another marvellous technical achievement in this poem is its use of diction, very few Latinate words except for a couple of medical terms – all of the unusual words here are Germanic in origin and their rough music, syllable by syllable, magically contributes to a euphony which would have been cacophonous in the hands of a less deft poet. And that’s all before we absorb the subject matter – an account of love whose subject is fragile and potentially vulnerable to horrific loss. I’ve read a few sonogram or ultrasound poems in my day but none push the envelope as far as this one has done.


The poem which I placed second was Alinda Wasner’s (USA) ‘Ode to the Night and in the Morning Following an All-Day Day of Arguing’ . It’s a list poem with a refrain of “Rejoice for”. It was in part reminiscent of Adam Zagajewski’s ‘In Praise of the Mutilated World’ and that reminiscence initially worked against it. But overall, structurally and diction-wise it is quite a different poem; also tonally different from Zagajewski but just as life affirming, just as likely to ring in the mind’s ear after the page is turned, the eye has closed.


Third place went to Tom Moore’s (Ireland) ‘Meteorites’. This is a far more structurally conventional poem than the preceding two but manages to pack substantial detail in imagery and subject matter into four tight quatrains. Ostensibly it is about observing a cosmological phenomenon in a domestic setting but it is also about the process of human thought, about the productive distractions of an inquiring mind and its capacity to draw comparisons between disparate entities – the very process involved in the composition of a good poem.

Now, on to the highly-commended poems in alphabetical order of the poets’ names.

Erica Fabri’s (USA) ‘Fish’ appeals to the Surrealist fan in me – it’s a very simple effective poem with a well-worked for, well-earned punchline – which means the poem’s merits do not depend on the punchline alone.

‘Mitterand’s Last Meal’ by Judith Krause (Canada) is another successful list poem with wonderful rhythm and diction. It also appeals to the political animal in me.

Judith Neale’s (Canada) ‘Blue Bowl’ is an affecting love poem without bathos or discordant music, without any of the time-worn clichés of love-speak.

Tanya Olson’s (USA) “Slave to the Virgin” is a poem with overt Irish subject matter – a biographical treatment of Matt Talbot which deftly balances the voice of an omniscient narrator with the fictional personal voice of Talbot speaking himself.

Lynn Robert’s (UK) ‘Le Douannier Rousseau: Surprised! National Gallery London’ isn’t, as the title might suggest, an example of ekphrasis but a narrative, recounting the painting’s composition, in language which flows very effectively and affectingly.

Mark Ryan’s (Ireland) ‘Breakfast with Yeat’s’ is a very funny parody of Yeat’s quite serious “He Wishes for the Clothes of Heaven” which would bring a happy smile to my face any morning.

Padraig Rooney’s (Ireland) “The Names of the Winds” celebrates love and lore together. It treats the importance of legends in our culture and how they can, with all their socially weighted value, impinge for better or worse on our thoughts during an intimate moment. The way Rooney moves sand in this poem is like the way Joyce moves snow in “The Dead” and the poem also shares an elegiac tone with that totemic example of Irish literature.

John Whitworth’s (UK) “First Sight” is another wonderfully humorous poem. It relates a man’s admiration for a woman he views through a video blog (a vlog to those less of an old fogie than I am) somehow without managing to be sleazy or exploitative.

Amber West’s (USA) ‘Daughter Eraser’ once again appealed to my Surrealist tastes and successfully illustrates the opinion that the truth is often better conveyed through aspects of myth rather than factual reportage.

Alexandra Zempiloglou’s (Greece) “I lost me child” is naive in the painterly meaning of the term, illustrating core human emotions in apparently guileless, simple language which sings with its refrain.

I was genuinely surprised to discover how weighted the results were in favour of women. In the top thirteen there are nine women and five men. Five Americans, Three Irish, Two Canadians, Two English and one Greek.

The 1700 poems were submitted by 567 poets. The countries which supplied the most entrants were Ireland (204) the USA (170) the UK (96) Canada (20) Australia (15) France (13) India (9). The remainder were made up by a motley selection of non-Anglophone countries. Mysteriously, there were no entries from New Zealand or South Africa.

Posted by Anti-Laureate at 1:22 PM