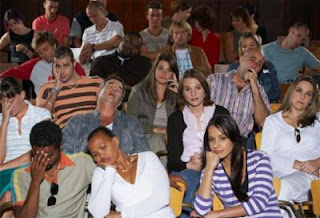 
Strange to think it, but there are still poets out there who deliver their poems in a monotonous monotone. Most of them tend to be over fifty years of age. Last century (literally) it was de rigeur to give a poetry reading in a monotone – I guess it was a reaction against the way many actors can mangle a poem as they declaim it. Most poets hate the way most actors read poetry. Somebody wise once observed that most poets, when saying a poem aloud, do so by moving from consonant to consonant whereas most actors move from vowel to vowel. Jeremy Irons is a lovely man but he is the stereotypical example of an actor who knows how to destroy a poem, especially one by Yeats, by stretching out every vowel like a dog’s yowl. Anyhow last century the way most poets mitigated against this particular trauma was to put no feeling at all or variation of tone into the public reading of a poem. To inject feeling into a poem was believed to get between the audience and the poem; to impose an interpretation. It was believed by many that if you delivered a poem in a monotone the audience could concentrate specifically on the words and react in their own chosen way as they might by absorbing words straight off the page.

Famously Paul Celan met with sneering disapproval when he read his poems in the traditional Eastern European shamanistic style (with feeling) to a group of German poets in Hamburg in 1952. One observer said Celan had sounded just like Goebbels, another said he sounded like he was singing in the synagogue. Amazingly, this attitude to reading poetry was not confined by the borders of Germany – it was fairly common throughout the English-speaking world too and was the most dominant reading style right up to the beginning of this century.

Slam and performance poetry shook the whole scene up – demonstrating how large audiences would react better to a bit of life in your voice as you declaimed your poem. Sadly there are still older poets who make it like it’s 1983 – often brilliant, insightful, exciting poets on the page who destroy their own reputations as soon as they open their mouths in a crowded auditorium – these days even frequent readers of poetry, even gifted, sophisticated younger ‘page’ poets no longer possess the ability to ‘read’ a poem aurally in a monotone. Monotone poets rarely receive repeat invitations to read and curators elsewhere get to hear how boring they sound and drop them from their thoughts too.


Nothing causes a festival or reading series curator to get more easily incensed than going over time. The more over time you go the more incensed they will be. Going way over time at a poetry reading is as offensive as pulling down your pants and defecating on stage. If you are reading before other poets you are eating into their time, you are upsetting a very carefully planned programme, you are displaying contempt for the audience, your fellow performers and the person who afforded you a time slot in the first place. It is always best to get off the stage leaving the audience wishing they heard more from you because once they no longer feel that, you have delivered too much of yourself and have overstayed your welcome. Aside from just not caring what you do and how it can impinge on other people there  appear to be three main reasons why people go overtime:
1       a)      The poet who thinks “They love me – I should stay up here all night.” – A dangerous delusion.
2       b)      The poet who thinks  “Shit, they hate what I have read so far – if I keep reading, one of my poems will eventually persuade them what a genius I am. “  - A dangerous delusion
C) The poet who lives in a different space-time continuum. This person knows that he has only twenty minutes to read, fully intends to keep within that time limit but because he really isn’t present on this planet is deluded into believing three minutes is only a minute long – he has failed to take the advice to plan out his programme, time the duration of each poem so that his list can be completed within the allotted time OR he does, but fails to take into consideration the huge amount of time he takes up with introductions and explanations which brings us onto the third best way to fuck-up your poetry reading.


3 Do an introduction like that parodied by Dennis O’Driscoll.


Some poets do wonderful introductions. Some poets do introductions that are way better and more entertaining than their poems – this has led others who don’t have the same talent to attempt to emulate them. They usually end up sounding like the poet parodied in Denis O’Driscoll’s poem The Next Poem.


4 Spend the whole reading avoiding all your best poems


I have been amazed the number of times I have seen poets decide to avoid reading their best poems. I once published a book by a brilliant poet. The book included much anthologised and discussed poems. But by the time the book was published the poet was bored of them himself. He decided to read the poems in the book which were never anthologised or widely discussed - the audience was left underwhelmed.  On another occasion a very famous American poet came to read in Ireland for the first time to a large audience. The audience was divided in three 1) people who were familiar with his work, loved his work and knew he was genius 2) people who had heard he was supposed to be genius but hadn't encountered the work before and came to find out what all the fuss was about 3) people who knew nothing about him at all. The famous American poet decided on that night to present himself to a completely strange audience by avoiding all the poems which had made him famous and beloved. Three months before he had acquired a new dog; was head over heels in love with dog. Had written a twenty poem sequence about the new dog. These were the only poems he read all night. All three sections of the audience were left very disappointed. I also came across a poet who read poems  about his cat all night - he was a far better poet than his cat poems but it just goes to show you don't need to be a dog lover to fuck-up your own poetry reading.
Posted by Anti-Laureate at 8:48 PM