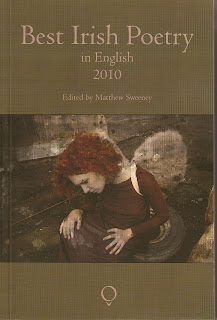 The fourth issue of Best of Irish Poetry has just been published. It is a handsome looking volume featuring a photo by Russian Evgeniy Shaman. It appears to be from the same photoshoot as the image in my blog banner.
This year it is edited by Matthew Sweeney who does a good job of casting an insider/outsider eye on the Irish poetry scene. Matthew has spent most of the last twenty years moving in the poetry circles of Britain and Germany and in his introduction admits pleasant surprise to discover for the first time poetry imprints such as Doghouse, Arlen House and Bradshaw Books. He has done a great job not only in selecting poems published in Irish literary journals but also poems by Irish poets in periodicals from across Britain and North America. The big names known to non-specialist readers such as Seamus Heaney, Derek Mahon, Paul Muldoon and Michael Longley are here along with other established names such as Pearse Hutchinson, Kerry Hardie, John F. Deane and Eamon Grennan. Women are well represented especially from the younger generation such as Sinead Morrissey, Leontia Flynn and Leanne O’Sullivan. There are also poets here who will be previously unknown to even the most expert reader of contemporary Irish poetry. 12 euro in the shops. It is available at a special price of ten euro from http://www.munsterlit.ie/
Posted by Anti-Laureate at 1:46 PM