The Lore of Place 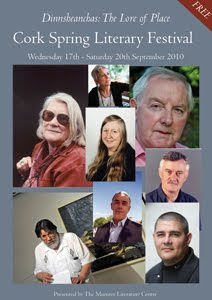 I’m excited by the upcoming Cork Spring Literary Festival February 17th to 20th (which I’m curating). The theme changes every year. In the past we’ve done love, politics, spirituality, migration and this year we are featuring writing which explores sense of place. Dinnseanchas or the lore of place is integral to the Irish literary tradition and the late Sean O Tuama has written that while place features in every literary tradition, the writers of no other European country are as obsessed with place as have Irish writers been.

We’ll have Jennifer Johnston who will be enjoyed not only by the regular attendees of literary festivals but also those bourgeois types who drag themselves out solely for a name familiar to them from the broadsheet review pages and TV culture programmes. I’m contemplating a scheme where entry to the Johnston gig will be free to anyone who regularly attends the other events but will cost 15-20 euro for those who just come to see her. Reading with Jennifer will also be an exciting young American and near namesake Adam Johnson who has published short story collections, a novel and who teaches in the writing department of Stanford. Sharing the stage with Adam and Jennifer will be Denyse Woods who has published a number of literary novels with Penguin and some potboilers under the pseudonym Devlin. Denyse has just been appointed as Artistic Director of the West Cork Literary Festival for 2010.

Other fiction writers featured this year will be Conal Creedon whose plays were recently received with glowing reviews in New York and Mary Leland who has published two novels, a story collection and who was just recently shortlisted for the Davy Byrne’s Award.

I like to feature mostly poets during this festival because of our concentration on fiction during the Frank O’Connor Short Story Festival. Derek Mahon, Paula Meehan, Bernard O’Donoghue, Eilean Ni Chuilleanain and Desmond O’Grady are all being featured, teamed with Cork City resident authors. Featured Cork authors with recent new books include Eugene O'Connell, Thomas McCarthy whose The Last Geraldine Officer has received rave and considered reviews from Maurice Harmon and Bernard O’Donoghue; Martina Evans whose Facing the Public continues to mine the Macroom of her childhood for literary gold; we are honoured that Theo Dorgan will be launching with us his first original full-length poetry collection since the last century Greek – featuring poems all of which focus on Greece and Greek culture.

Other out of town poets of note attending include big guns such as Ciaran O’Driscoll, Gerard Smyth, Patrick Moran, Mary O’Malley and Michael Coady who has just published a substantial new collection.

The younger generation of writers is being represented by such names as Matthew Geden, Liz O’Donoghue, Louis De Paor and Billy Ramsell.

Last but not least we are featuring one of the USA’s most famous of contemporary poets (one who has yet to be exported as successfully as some others) Martin Espada who has been described as the leading Latino poet writing in English. He has published in Southword a brilliant essay on sense of place. His work is noted for its political commitment without being polemical. He is very much influenced by Pablo Neruda and other Iberian-language poets. For my money, he is the only foreigner who has written successfully about Ireland in poetry without sounding like a tourist.

A timetable can be found here . A fully-downloadable programme should be available next week.
Posted by Anti-Laureate at 9:42 PM