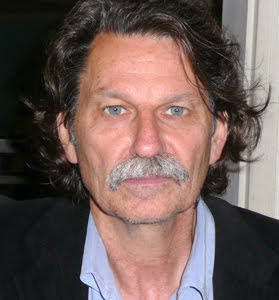 I’m completely baffled that Gregory Orr is not better known outside the United States. I’m baffled that his name never appears in those New York Times lists of names in contention for the position of US poet laureate. So in introducing Orr to an international audience in Cork, Ireland I feel compelled to recount in detail my history as a reader of Gregory Orr’s work and give you the foreground which prepared me to receive him.

I’m fervently of the belief that Poetry is what is NOT lost in translation. Vladimir Nabakov asserted, not entirely sincerely I believe, that literary works are essentially little more than elaborate toys for the entertainment of sophisticated adults. Certainly we can take pleasure in the virtuosity of Larkin’s syntax or Muldoon’s innovative rhymes. We can luxuriate in the comic timing of Pope or Dyrden, but at the end of the day if a poet doesn’t convince us with their poetic sensibility we do not take them to that part of our brain which we refer to symbolically as our heart. A poet’s sensibility, sometimes conflated with Voice, is the product of a person who has successfully expressed the uniqueness of their experience, the uniqueness of their making sense of the world, time and time again, consistently.

Nabokov was right when he said mediocre writers are versatile, genius has only itself to imitate. And while a poet often deploys incantation, symbols, story skilfully to convey sensibility, at the same time sensibility is oddly physically independent of those structural things in the same way that if you hold a computer disc in your hand, turn it this way and that you can’t see the code imprinted upon it and if you wipe the code from the disc the disc appears, physically, to our eye completely unaltered. This is why the technically perfect poems often composed by authors of manuals on poetic form as examples, are completely indigestible, emotionally and intellectually, outside the manual, because like the computer disc devoid of code – they are poetic forms devoid of sensibility.

The main responsibility in translating poetry from one language to another is to preserve the sensibility while transferring it to a completely different medium of sound, of readerly expectation – English is a such a rhyme poor language for instance, that often it’s better to translate a rhyming poem in a foreign language into an unrhymed English version, the better
to preserve its sensibility.

These considerations came into play for me in encountering the work of Gregory Orr for the first time towards the end of the Cold War. And I deliberately say the Cold War rather than the end of the 80s because the political situation pertaining then was crucial to how poetry was received and valued in these islands at that time.

When I began to seriously read poetry for myself as a teenager I was most attracted to work in translation. Penguin had produced a wonderful series of modern poetry in translation at the end of the 60’s and in the 1980s most of those volumes proliferated in second hand book stores because they were mostly by poets writing under Soviet occupation, promoted in the West as victims of a brutal regime, which they were, but often valued more for that fact than for reasons
of their poetic sensibility. So these books were snapped up by people spurred on by the sensationalism of Cold War propaganda and quickly disposed of later, because their readers had no appreciation for poetic sensibility.

The 1980s was a time when Anthony Thwaite, alleged English poet and critic, could declare (Poetry Today : A Critical Guide to British Poetry 1960-1984) that the work of Thom Gunn coming out of America was technically incompetent and that Ted Hughes was sloppy. He was part
of an establishment which professed to admire the work of Paul Celan, Zbigniew Herbert, Mioslav Holub, Vasko Popa, Marin Sorescu, Georg Trakl but was prepared to censure anyone in or of these islands, ready to write in the forms exemplary of these poets , where the length of a line was more often determined by breath length rather than metre or syllabics. Where symbol was more important than rhyme, where organic, unevenly shaped stanzas were preferred to what I refer to
as the typographical topiary of arbitrarily shaped quatrains, tercets, sextets, etc.

This was unfortunate for me because my poetic precursors as I began to write as a teenager were Gottfried Benn and not Philip Larkin, Paul Celan and not ThomasKinsella, Zbigniew Herbert and not Seamus Heaney. Aesthetically, I was left out in the Cold in this Cold War. And I wasn’t the only one. Most women, in Ireland, beginning to write poetry at this time were also unattracted to the traditionalist forms then in ascendancy.

Then one day around 1988-89 I discovered The Red House by Gregory Orr in Connolly’s bookstore in Paul Street. I had never heard of the poet, but a cursory glance through the pages pleased me and it was selling for £2.50.

I brought it home and began to read what appeared to be these very, very simple poems. Apparently so simple in structure and form as to constitute a writing which would barely be recognized as poetry in these islands. I couldn’t imagine Peter Fallon publishing it if he had a thousand lifetimes to consider it and yet I was blown away by their poetic force. They had an undoubted poetic power without, seemingly, any means of visible support. But what they did have was a unifying sensibility whose power was cumulative as you moved from poem to poem, a sensibility bound together by a symbology which was of Orr’s own making - as distinct from the symbology often found in a poet like Yeats which was more tradition in origin.

Orr has also written the virtuoso poem, the poem which could stand out from the crowd in a competition or earn a place for itself in an anthology, but here was a book primarily of poems which did not depend on showy virtuosity, whose power derived from a quietness, a stillness at their core. As a reader and a writer I was inspired. I wrote a sequence of poems which was published in part piece by piece in periodicals but mainly just baffled people here, even poet friends who were favourably disposed towards me.

Twenty years later, assembling a new book, as a last minute caprice I brushed off this ancient sequence and added it. When the reviews came in the part of the book most praised was that sequence. So I returned to Orr as a reader.

Gregory Orr would passionately disagree with the notion that poems are mere elaborate toys for entertainment. Orr believes that poetry is an essential tool for reconciling personal trauma. The tragedies that Orr has had to live through and with, in his life are sensational. And just like sensation drove many Cold War readers to the books of Eastern European poets, many readers seeking sensationalism have flocked to Orr, but just as many readers who find sensationalism disgusting have stayed away, - not realising that stillness and quietness is at the core of his poetry and not the quick, brash emotional fix the sensationalists seek. And because much of Orr’s power as a poet gathers cumulatively from poem to poem, anyone who seeks out the quick virtuoso fix is also often disappointed.

As a human being, approaching, Gregory Orr, I am filled with empathy and sympathy for the man who has suffered such personal tragedies. But as a reader approaching his poems I don’t give a damn, because although his tragedies certainly shaped the kind of poet Orr has turned out to be and occasionally crop up as subject matter in the oeuvre, the tragedies alone do not imbue the work with its worth. Orr’s worth is in the consistent empathy he shows for the human condition, often channelled through showing sympathy for a leaf or a carcass of beef, but always in language which affirms truth in a way that the politician and ostentatious public saint cannot.

By sensibility, Orr is the consistent, un-versatile genius Nabokov described, but over a lifetime, structurally, like Rilke, he has been several different poets. For a period he wrote villanelle after villanelle and more recently his symbol-laden poems addressed to the Beloved evoke The Sonnets to Orpheus or the Duino Elegies. They do this by all originating from the same pod, they resemble each other like multiple embryos split from the same egg, they exude a sacredness like the Opheus Sonnets and in the same way that Rilke’s Elegies and Orpheus Sonnets are semantically more challenging than his Book of Hours or New Poems, Orr’s poems to the Beloved are less accessible than his earlier work and require a different mode of reading.
Posted by Anti-Laureate at 11:34 AM