Pigeons I Have Known 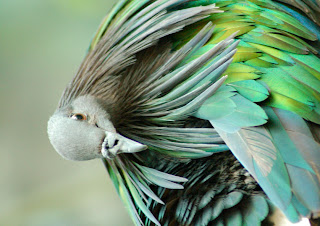 Often when people attend a poetry workshop at a festival they bring their best, well-made, well-honed, unpublished piece, just to show off and establish their credentials. Me – I always bring a piece giving me trouble, not quite working, hoping for an objective eye to point out where it could be improved or how it might be made to work. Once at a workshop in Florida I presented a poem about a suicidal pigeon in San Francisco on the edge of China Town. Of course, it being a poem it was about more than just the pigeon but it described how she hopped out into the middle of the road as she tried to cross the street on foot, as if she had forgotten she had wings (like Samsa’s beetle) and reached half way across the asphalt before a Cadillac ran her over and there was an explosion of pigeon feathers like grey confetti. and – greater surprise - when the traffic had cleared the sight of the pigeon, stll waddling, still alive, reaching for the opposite sidewalk with dishevelled tail feathers and a Loony Toons aura to her.
Everyone on the street stared. When she reached the other side she walked the short walk to the next intersection where she prepared to throw herself into the traffic on foot all over again. I talked in the poem about how I had never known another pigeon quite like it, of all the pigeons I had known in my home city in Ireland none had behaved like that.
It wasn’t a great poem, but when the celebrity performance poet from Manhattan, a fellow attendee, chose to comment on it he didn’t pick out any of its structural weaknesses or its clunky music. He decided to deride the idea that anyone could have a relationship with or cognizance of an individual pigeon. For him a pigeon was one of a mass of characterless rats with wings and because it was beyond his own experience to know a pigeon individually he wouldn’t (not merely couldn’t) imagine anyone else being able to do so.  I could have told him about my next door neighbour who had pigeons hop all over her hands as if she were some latter day Francis of Assisi whenever she fed them, or the pigeons snared and caged by classmates when I was a boy. I could have described the love one boy had for a pigeon the colour of chocolate or I could have told the Manhatten Celebrity of the astonishment of a friend from Shanghai upon encountering pigeons in Cork by saying “If they were in Shanghai they would be eaten”.  Everyone’s experience is different and the most fatal mistake any writer can make is generalising everyone else’s reality from his own narrow perspective. In fact a great deal of pain exerted by non-writers on fellow humans stems from the same fatal mistake.

Posted by Anti-Laureate at 2:47 PM