What good is poetry to the economy? 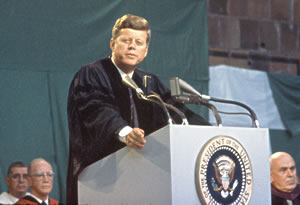 In the 21st Century, age of austerity, state funding for culture is coming under increasing attack from right-wing economists who, to quote (as you know) Oscar Wilde, “know the cost of everything but the value of nothing”.

Most poets know all or part of the following quote from President John F. Kennedy


Not everyone knows the rest of the speech which was given in honour of Robert Frost after his death.


The context for the quote can be found here:


I believe that this is as an effective an argument in favour of poetry as any other. A strong economy may contribute to national strength but poetry contributes to the national spirit without which that strength is meaningless. In this consumerist age it’s a common mistake by some to expect poetry (and all human endeavours) to contribute to the economy. But the fact that poetry contributes to the national spirit ought to be justification enough for society to contribute economically to poetry.  For while the spirit may be divorced from the market place, the bodies which are inhabited by the spirit need physical sustenance. Society needs to make economic sacrifices for her poets because poets make economic sacrifices on behalf of society by choosing poetry over more venal & profitable pursuits.
Incidentally Kennedy made this speech about six hours before I was born (two weeks premature) after midnight, Irish time, October 27th 1963 - I heard his call

Posted by Anti-Laureate at 2:06 PM