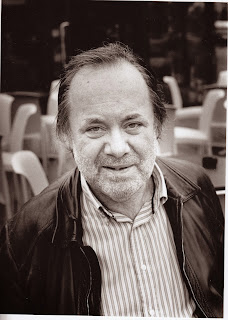 Ilya Kaminsky very generously invited me to Chicago to record at the Poetry Foundation an "International Poets in Conversation" podcast with a senior Irish poet of my choice. I chose Matthew Sweeney. The podcast series is part of an initiative by the Poetry Foundation to encourage poetry communities across the United States to programme poets from abroad. Our trip to Chicago was contingent on us being able to arrange at least three other readings - which we did in Brooklyn, Seattle, Berkeley and San Francisco. Here you can listen to us discuss Eilean Ní Chuilleanáin and Michael Hartnett among other Irish poets and also talk about the influence 20th Century German poetry had on our own work.
The link brings you to a page which lists previous recordings in the series including the likes of Adam Zagajewski, Kwame Dawes and two of my favourite younger poets - Belarussian Valzhyna Mort and German poet Jan Wagner who is Sweeney's translator. Also listed on the same page are recordings by American poets such as Philip Levine, Mark Doty and Eavan Boland.
Posted by Anti-Laureate at 12:24 AM